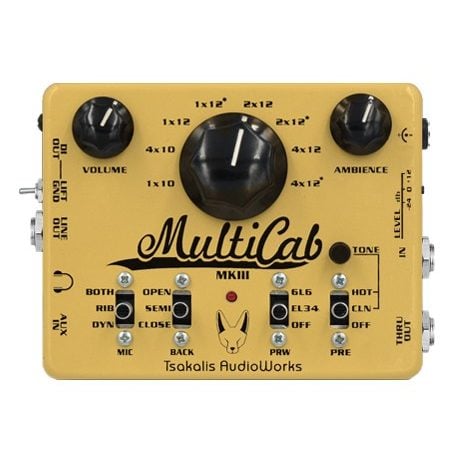 The MultiCab MK3 is controllable via four three-position selector switches and four dials. The giant central knob picks one of the eight cabinets, while the smaller controls are for managing the preamp section’s tonal character, the amount of room ambiance, and the overall volume.

Boasting a series of versatile I/O connections, the MultiCab MK3 allows for routing the quarter-inch input to a line out, a through out, a headphone out, and a balanced XLR out. It also includes an auxiliary input to make the unit handier for practice. Such an extensive set of connections enables several possible use-cases for the stompbox.

“Go direct to the PA and the audio interface from your pedalboard with MultiCab MK3 and create a lightweight rig. Use it as an amp DI between your amp and the cabinet to send your true tube tone to the PA. Pair it with a dummy load to practice your tube amp silently at home with headphones and jam with backing tracks by using the AUX input,” Tsakalis AudioWorks detailed.