Unless you’ve got a regular gig in a Gothic cathedral or underground cavern, it’s probably safe to say that you need some sort of artificial reverberation effect for your guitar rig. Reverb can be as simple as just adding a bit of echo or as complex as layering subtle delays, choruses, and more into the patterns of those echoes. Although reverb is one of the most common on-board effects included with amplifiers, many guitarists prefer the more specific, detailed controls of a separate reverb pedal.

Extending well beyond the single reverb-level type knobs that most amp-housed reverbs have, the stompboxes we’re looking at here are incredibly versatile. Most have wet/dry mixes, bass/treb EQs, and the ability to switch between different types of reverb, from classic spring, to reproductions of the plate reverb that was always too bulky to put into amps, and even simulations of different sized halls and chambers. Many reverb pedals today even combine other ambient effects like chorus, delay, tremolo, vibrato, pitch modulation, and octave doubling into the fading echoes of their sounds, giving infinite possibilities to guitarists looking for that particular quality.

Keep reading to see what the new reverb effects of 2019 have in store for your sound as it echoes and resonates into the ether. While digital reverb units continue to improve, French boutique company Anasounds has gone in the opposite direction by embracing the classic spring reverb tanks of the 1960s.

The Element stompbox has all the control knobs you’d expect: two-band EQ, wet/dry mix, etc. But to get that vintage spring reverb sound, you’ll need to hook the box up to external tanks loaded with springs. The “premium bundle” that Anasounds sells comes with three sizes of tanks that connect to the pedal. They’ve even got plexiglass windows that let you see the springs literally reverberating.

It may take up a bit of extra space—or a lot, if you’re using the supersized Le Truand tank—on your pedal board, but it’s more affordable and lower profile than about any other stand-alone tank reverb unit. There’s also no substitute for its analog warmth. Plus, this is the only unit reviewed here that will give that classic reverb “splash” sound (listen to the opening of “Cecilia Ann” by the Pixies) when you thump it. For the price and size, the Treeverb from Dwarfcraft Devices is a super-versatile unit, thanks to its three settings: Hall, Pitch, and Modulated. For traditional, classic reverberation, stick to Hall mode. You can also dial back the length on this setting to get a nice rockabilly slapback tape delay sound.

If you really want to blast into the stratosphere, Pitch mode adds subtle octaves both up and down. Modulated mode tacks an additional chorus effect onto the wet signal. Maxed out, these settings will give your sound some serious synth/orchestral sounds that are reminiscent of Sci-Fi movie effects. The Treeverb is a great vehicle for venturing from traditional reverb into more out-there sounds. 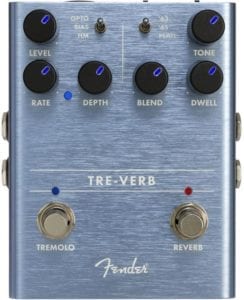 The company that pioneered the stand-alone spring reverb unit and produced amps that were eponymous with the effect has now put a variety pack of its best reverb and tremolo sounds from the 1960s into one digital stompbox. You can switch between a 1963 spring unit, a 1965 Twin Reverb amp effect, and even a modulating plate reverb effect that—although not completely historically accurate—gives a classy depth to sparse, single-note fills.

Combine these various reverbs with the tremolo features (including tap tempo tremolo), and you’ll come close to modelling the clean sounds of much of Fender’s 1960s amp catalog: Princetons, Twin Reverbs, Super Reverbs, Vibro Camps, and more. As an added bonus, it features stereo inputs and outputs. The F-Stop from Milkman Sound provides elegant, no-frills excellence for players wishing to reproduce the classic sounds of 1960s surf and spy music. Think thundering low note lines resonating with spring reverb, pulsing with a hypnotic tremolo, all driven by pure tube power. The pedal is evenly split with little interplay between the two effects, each one controlled by its own on/off switch. Digital spring reverb is on the left, with a wet/dry blend and decay control. The tremolo is fully analog and it sits on the right of the pedal, with adjustments for speed and depth.

Basically, this thing is a Fender Princeton Reverb-in-a-box. And if you’re looking to blast back into the past like a Tarantino soundtrack with the reverb of Dick Dale’s “Miserlou” or the tremolo of Nancy Sinatra’s “Bang Bang,” this is your pedal. 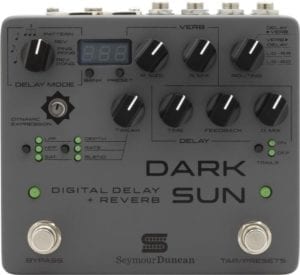 Built to the specs of Periphery guitarist Mark Holcomb, Seymour Duncan’s Dark Sun is like a super weapon for guitarists who want the swirling, ambient sounds that comprise reverb’s ultimate potential. This is not a pedal for players wishing to switch between traditional hall, plate, and spring modes; rather, it coaxes every possible interplay between the echoes of digital delay and hall reverb. The delay reverberates, the reverb gets delayed, and you can control every aspect of these combinations.

For controls, you can adjust tone saturation, modulate the pitch of the reverb, and filter out highs and lows on the EQ. Stereo outputs allow players to assign reverb and delay to specific channels. The pedal is also loaded with presets tweaked by Holcomb, making the complex controls a bit more manageable. Delay can be adjusted at rates of quarter, dotted eighth, eighth notes, and triplets. The pedal is also fully MIDI capable and has a USB jack for additional updated presets.

For pushing beyond traditional reverb and into the furthest frontiers of digital, dreamy ambience, it does not get much more capable than the Dark Sun. 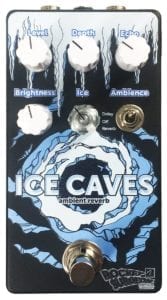 This is a fairly straightforward digital reverb pedal that will give you plenty of vintage sounds, all easily customized via Brightness, Depth, and Echo knobs. But it goes further. To make the jump from pedestrian reverb into the realms of dreamscapes, check out the lower-right controls of this pedal, where an Ambience switch toggles between Delay and Reverb. The Reverb setting loops feedback back through the pedal’s entire circuits, resulting in a near-infinite background drone. Delay does the same thing, but only feeds back from the delay circuit.

The ambient levels of both the Delay and Reverb are adjustable through the adjacent Ice knob just to the left. Turn the Ice all the way up, and you’ll probably be overwhelmed. Find just the right setting, and you can use this pedal for full hall, spring, or plate reverb effects, and even “almost” as a light delay effect, according to Rocket Surgeon. These ambient, “icy” controls are where the pedal really shines through, creating layer upon layer of overtones that really fill up sparse single-note runs. The Slö from Walrus Audio pushes reverb past the ordinary frontiers of spring, plate, and hall sounds by taking them into the realm of ambient, dreamlike soundscapes. Like the Treeverb, it does this by incorporating octave and vibrato into the mix, but it goes much further, giving you options for different swelling and modulation effects.

The pedal’s three “algorithm” modes are Dark (an octave down), Rise (an auto-swell), and Dream (a signal latcher that adds vibrato to the trailing echoes). Each is adjustable with the pedal’s “X” knob, and you can further customize the modes by holding down the bypass button to switch between Sine, Warp and Sink modulation wavelengths.

Going beyond knob controls and the algorithm switch, you can even press and release the bypass and sustain buttons to adjust the buildup and breakdown of your swelling sounds, letting them taper off gradually or end abruptly. There’s a lot going on in this little pedal, and if you’re looking to truly push the lush, swirling soundscapes of your playing, this is it.

So which of these new pedals is right for you? It depends on exactly how you’d like your personal sound to reverberate and fill up the room.

Whichever one you choose, one thing remains certain: with all these great pedals, you’ll barely ever have to rely on your amp’s reverb.